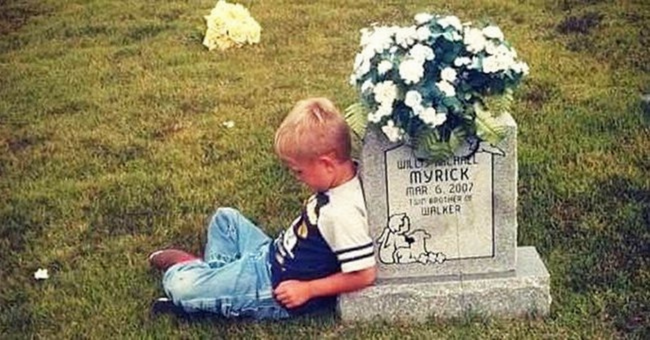 Twins are frequently said to have mystical connections, such as reading each other’s minds or feeling what the other is feeling from afar. Is this specific link, however, present after death?

Walker Myrick and his twin brother Willis Myrick were born into this world alive, crying, and, most importantly, together.

Willis, on the other hand, died as a result of TTTS, or twin to twin transfusion syndrome. As a result, he died while still within the womb.

Despite the fact that he is physically gone, the twin’s mother, Brooke Davis, claims that her son has a particular bond with his brother, even though he has died away. Davis stated:

“It’s just one of those things. I truly believe he’ll always have a connection with his brother.”

The twin had frequent nightmares about his brothers and was happen to Willis’ tomb, where he would tell him about his life. His mother would occasionally photograph him doing so.

A DISCUSSION BETWEEN SIBLINGS

One especially touching photograph was shot in 2012, when Walker, then nine years old, attended Kindergarten. He leaned on his brother’s tomb and recounted his whole first day. Davis stated:

“Willis actually lives through Walker, and I believe he keeps an eye on him.”

When she thought back on the day, she remembered how excited her kid was, leaping out of the car before she could.

The small youngster himself confirmed this link to his other half in a video made on Christmas in 2016. Walker stated, in his own words:

“I still remember my brother today, and he watches over me all the time.”

Brooke has stated that her son’s link with his late sibling has given her some inner peace amongst the grief of losing a child.

However, the loss of Willis was still extremely distressing for her, her husband, and their entire family. As a result, turning her anguish into her purpose, this mother opted to act.

The purpose is to raise awareness of TTTS and donate $2,500 to the TTTS Foundation each year. Davis advised parents on what she believes they should do if they are experiencing what she did:

“I would tell them to know that their children never leave them.”

If her son’s experience with his deceased sibling is real, then this loving mother’s comment surely rings true.