HomeStoryKirsty Hannam Told She'd Never Be A Mum And Has Four Babies... 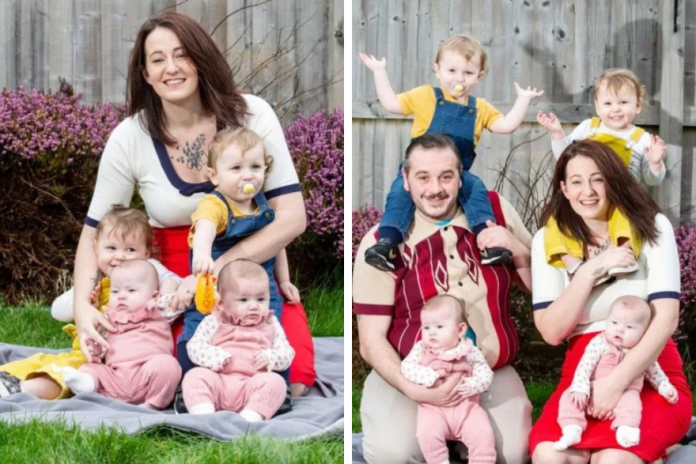 But in November 2018, Kirsty found out she was expecting twins with her three-month partner, civil enforcement officer Rob O’Hara, 34. On June 11, 2019, she gave birth to William, who weighed 5lb 9oz, and Willow, who weighed 6lb 7oz, at Bath Royal United Hospital.

Six months later, she was back in the same hospital with severe endometriosis pain. Doctors advised her that the condition would eventually require a hysterectomy.

Kirsty, a stay-at-home mother from Frome, Somerset, said: “To go from being told that I would never be able to have children to having four in the space of a couple of years was absolutely amazing.

“Having two sets of twins is a real handful, but I feel so lucky and it’s such a blessing.”

Kirsty had accepted the possibility of never having children with her ex-husband after being diagnosed with endometriosis at a young age. Her seven-year marriage ended in divorce in 2018.

She said: “I was married and settled and children seemed like the next step but I knew it probably wouldn’t happen.

“It was devastating as I always wanted to be a mum. When people asked what I wanted to do that’s what I said I wanted to do. But my partner and I came to terms with it.”

Kirsty established a new connection with her school friend Rob after her divorce from her spouse.

Kirsty said: “Rob knew all about my condition when we got together so it was never an issue.

“We went on our first romantic mini break away in Bruges, Belgium, together and I know now that the twins were conceived there.

“It was a couple of weeks later and I just didn’t feel right. My hormones were a bit all over the place so I decided to take a pregnancy test.

“It was actually also on the day that I was moving in with Rob so there were lots going on.

“I didn’t in a million years expect it to be positive but when I saw it I just said: ‘Oh my god’ and told Rob.

“But he was really happy and we were excited – despite having been together for just three months.

“But I didn’t want to get my hopes up as I had been told before that a pregnancy – if it were to ever happen – would probably be ectopic.”

Kirsty had her first scan in November 2018 with Rob by her side.

She said: “I was expecting there to be something wrong because the sonographer turned the screen around, but then she told me I was having twins.

“I actually told her to ‘**** off’ jokingly because I couldn’t actually believe it. I just started hysterically laughing and then crying.

“I don’t really even remember what I thought. I just said to Rob, ‘Look babe, we’re having twins’ and we just walked out and sat in the car in silence for a moment.

“He had a massive smile on his face. Then the excitement hit and we just couldn’t wait for them to get here, we felt so lucky.”

Kirsty had no idea she’d have another kid once William and Willow were born.

She said: “Rob and I did want more children, but we knew I’d have to have a hysterectomy so we didn’t think it would actually happen.”

Her second pregnancy caught her off her, but there was more to come.

“At my first scan, the midwife asked me if twins ran in the family,” she said.

“Rob came in and just started hysterically laughing. He thought it was completely brilliant and told me we were going to be fine.”

Kirsty added: “I feel so blessed that I managed to be a mum without any medical intervention.

“It’s hard having two sets of twins who are so young but we have a routine. They all have their own little personalities and it’s wonderful to watch.”

Rob said: “Initially it was terrifying. But the moment I saw the scan of the twins and I saw two little eggs I couldn’t imagine anything different.

“And to think that Kirsty thought that she couldn’t have children – it was amazing.”