HomeStoryMan Becomes First Graduate Of His College With Down Syndrome History 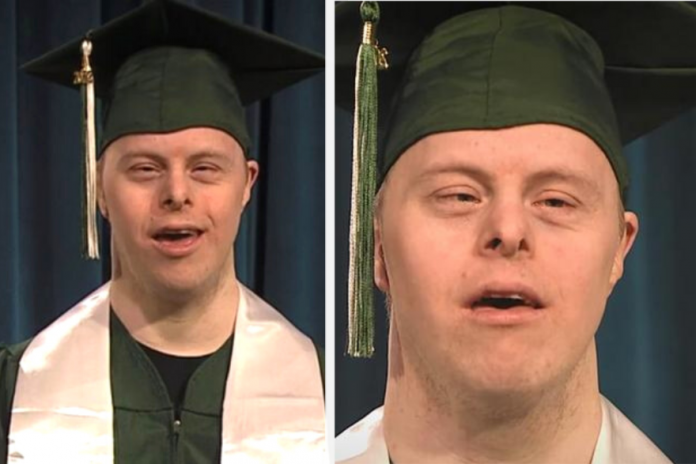 What exactly are trailblazers? They are people who, by definition, chart a new road for others to follow, establish new standards with their accomplishments, and question the status quo to forge a new path forward.

They can be top-level sportsmen who shatter records, brilliant scientists who develop new ideas, or surgeons who conduct previously unheard-of surgery. However, even ordinary people may become trailblazers just by following their ambitions.

Dylan Kuehl, 38, of Olympia, Washington, had a straightforward goal: to graduate from college. Kuehl, on the other hand, was no average pupil. He has Down syndrome, a genetic disorder that impairs cognitive and intellectual ability. But, with determination and inspiration, the motivated Kuehl pushed harder than ever before and is now a graduate of The Evergreen State College.

“When I first started, I had people tell me that I wasn’t ready for college and it discouraged me. Instead of giving up, I built a yes team of people … who supported my goals and gave me the resources to succeed,” Kuehl said in a graduation video posted on June 9, 2022. He was one of only three out of almost 900 chosen to make a graduation speech.

Kuehl, who enjoys painting and dancing, now has a Bachelor of Arts in writing.

And by accepting his scroll, Kuehl has blazed the route and earned victories for inclusiveness and diversity by being The Evergreen State College’s first individual with Down syndrome to graduate in the college’s 51-year history.

In his address, Kuehl was quick to thank those who had helped him along the way, praising family, friends, classmates, and faculty members for inspiring him to continue on track.

“All of our hard work, perseverance and never giving up has led us to this very moment,” Kuehl said.

He also reserved a special thank you to his college, saying: “Evergreen is based on acceptance where many other students like me can have a right to be included. Diversity and inclusion create a well-rounded community for us all.”

But even in humbly acknowledging their help, Kuehl was also clear about one thing: he earned what he achieved through “hard work and perseverance,” and nobody could take that away from him.

“We’re all here because of our hard work and dreams,” he said

Kuehl now wants to inspire people to follow in his footsteps and dream greater than ever before.

“I want my academic and revolutionary achievements to open new doors for more students.”

There is little question that Kuehl’s journey will inspire those striving for academic success and that the route he has blazed for himself will serve as a guide for those facing similar challenges. Kuehl provides us with some pearls of wisdom to assist people to think that they can achieve whatever they set their minds to.

“Celebrate your abilities. Live your life with ambition and pride,” Kuehl said, “Yes, I am the very first person to graduate here, but I’m not going to be the last.”