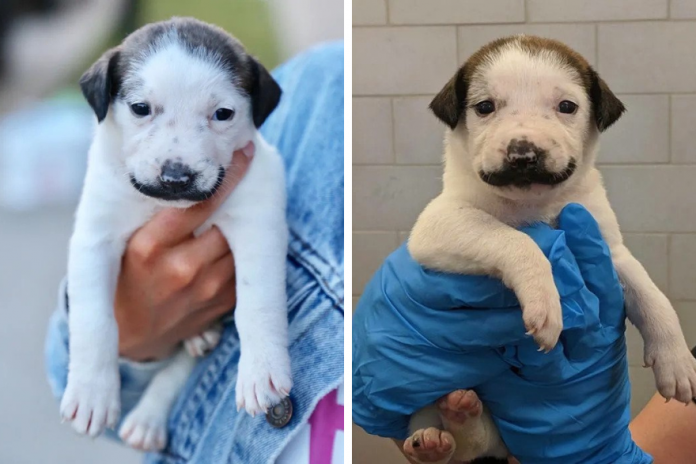 Each puppy is unique and adorable in its way. While some puppies are adorable and chubby, some have the prettiest eyes, and fluffiness and those steal our hearts by just being their mischievous and funny selves. Also, some catch every eye right away with uncommon colors and get highlighted in the crowd.

Salvador Dolly might seem like an odd name for a dog, but once you see this 5-week-old pup, you will understand why the name fits.

Salvador Dolly was born to a brown shepherd mom and an unknown dad, sporting a jet-black handlebar mustache coming out of either side of her tiny black-and-white nose.

Salvador’s puppy currently lives in New York foster care and she is one of the puppies from a litter of 11.

The mustachioed puppy went viral after Hearts & Bones Rescue, which is jointly based in Salvador Dolly’s city of birth, Dallas, and New York City, posted a picture of her on Facebook on July 26 after rescuing her and her family via Dallas Animal Services.

“These days its puppy season at Dallas and all the time there are several moms with litters at the shelter,” Allison Seelig from Hearts & Bones Rescue described. “Dallas Animal Services, a shelter with the 3rd highest number of animal intakes in the whole country, took in mama and her 11 babies as homeless and looked after them for 2 weeks, but puppies have a high chance of falling ill in the shelter home, so we had to take them out,” she continued. All thanks to the support from Dallas Animal Services and Hearts & Bones Rescue, it took less than a week to move the entire family of 12 from the shelter to foster care.

Whitney Fang, a co-founder of Hearts & Bones who is currently watching the family before they are moved to their foster home, told TODAY “they are growing quite a bit! Salvador Dolly is actually very feisty.”

Detailing the changes that take place when puppies are very little, she mentioned that “once they start growing and walking and running around, you start to learn their personalities a little bit.”

There are many people interested in adopting Dolly, but they are going to have to wait.

“As you can imagine, we actually don’t have her posted on our website right now, simply because she is too young, so she’s not available to adopt right now,” said Fang, who noted the nonprofit has received applications from “all over the U.S., even abroad.”

Hearts & Bones is sharing the story of Dolly and her family to raise awareness of adoption and fostering. Fang said that “we wanted to use this as an opportunity to promote adoption more generally.

“There are shelters all over the U.S., shelters abroad, and, you know, go to your local shelter and find your forever friend,” she continued. “Even if you can’t adopt, there are plenty of ways you can contribute: You can volunteer at the shelter, you can volunteer at your local rescue, you can donate, you can give your time. There are a lot of things you can still do to help the overall animal welfare community.”

Hearts & Bones Rescue is a foster-based dog rescue and has teams in both Dallas, TX, and New York City. They work with overcrowded shelters (such as in Dallas) where they sometimes take in over 100 animals in a day. Their key goal is to save as many lives as possible and help look after the dogs in any possible way. “Once our dogs leave the shelter, we send them to foster homes in the Dallas area for two weeks to make sure they’re healthy, and then send them to NYC, where the number of people wanting to adopt dogs is surprisingly high!” Allison described the procedure.