HomeAnimalThe Honey Badger Is A Member Of The Weasel Family

The Honey Badger Is A Member Of The Weasel Family 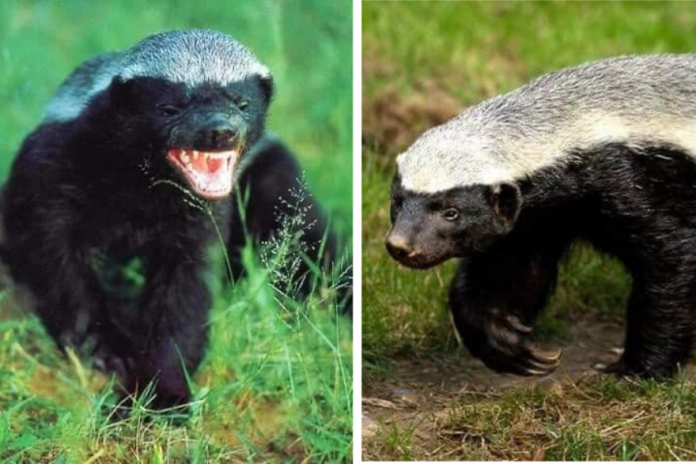 The honey badger is a member of the weasel family, which includes skunks, otters, ferrets, and other badgers. Its scientific name is ratel, but the colloquial name honey badger comes from what appears to be its favorite food: honey. However, the animal’s true appetite is for the bee larvae contained in honey!

The body of this hardy little animal is stocky and flattened, with short, muscular legs and large claws on the front foot for digging and defense. The honey badger has thick, coarse hair that is predominantly black, with a wide gray-white stripe running across its back from the top of the head to the tip of the tail.

Is it reminiscent of a skunk? The honey badger also possesses a gland at the base of its tail that contains a smelly substance similar to that of its doppelganger. The stinky material is used to mark territory, but when the honey badger is scared or threatened, it drops a “stink bomb” instead of spraying the odor like its skunk cousin. The honey badger’s stink may not stay as long as that of a skunk, but it sends a clear message: “Leave me alone!”

It would be difficult to find a more fractious animal than the honey badger. It doesn’t start conflicts it can’t complete, and it’s a formidable adversary. Furthermore, the honey badger’s skin is robust and loose, allowing it to twist around and attack an opponent who has gripped the back of its neck. When you combine it with a large cranium, formidable fangs, and that horrible stink, you get an animal that no one wants to deal with!

Honey badgers are endemic to Africa and Asia, ranging from southern Morocco to the continent’s southern point, as well as the Caspian Sea, Turkmenistan, Afghanistan, Nepal, and western India. They are mostly found in arid places, however, they may also be found in woods and grasslands. Honey badgers can climb trees and swim well.

The honey badger builds holes up to 9 feet (3 meters) long and 5 feet (1.5 meters) deep using its powerful claws. A solitary tunnel leads to a barren room where the honey badger sleeps. When it comes to creating a home, honey badgers aren’t hesitant to use what’s already available, such as rock crevices and tunnels beneath tree roots, ancient termite mounds, or aardvark dens. The honey badger takes up burrows built by Cape foxes, bat-eared foxes, yellow mongooses, and springhares.

Honey badgers are exceedingly secretive and difficult to see in the wild since they are nocturnal species. They spend most of the day sleeping, rolling up into a ball to protect their face and tummy.

What’s for dinner? Everything! The honey badger eats anything from tiny animals and they’re young to birds, reptiles, insects, carrion, and even some flora, particularly luscious fruits.

Honey badgers in zoos are fed a commercial meat diet designed for zoo carnivores, mice, mealworms, and crickets. They are given a bone to gnaw on once a week and are given fruit as a reward on hot days; honeydew is a favorite. Of course, a spoonful of honey is always welcome!

A honey badger was alleged to have repeatedly escaped his enclosure in order to battle with the lions in one zoo.

Honey badgers are mostly solitary, with overlapping home areas. They may congregate in favored foraging sites, sniffing each other and rolling about to scent mark the ground. Honey badgers have a loud and sinister growl and can grunt, squeak, hiss, and whine.

The female honey badger is left to give birth and nurture her young on her own. For her infant, the pregnant woman builds a nursery chamber and lines it with grass. One cub (rarely two) is born during a gestation period of 7 to 10 weeks. The infant has no hair, pink skin, and closed eyes. Its skin begins to turn from pink to gray in one week of life, and fine gray hair begins to develop two weeks later. A week later, the typical white stripe develops.

By the time the cub is three months old, it has become an exact replica of its parents. It achieves adult size at 6 months but is not ready to go off on its own until the youngster is 14 months to 2 years old because the youngster requires time to perfect those key hunting abilities.